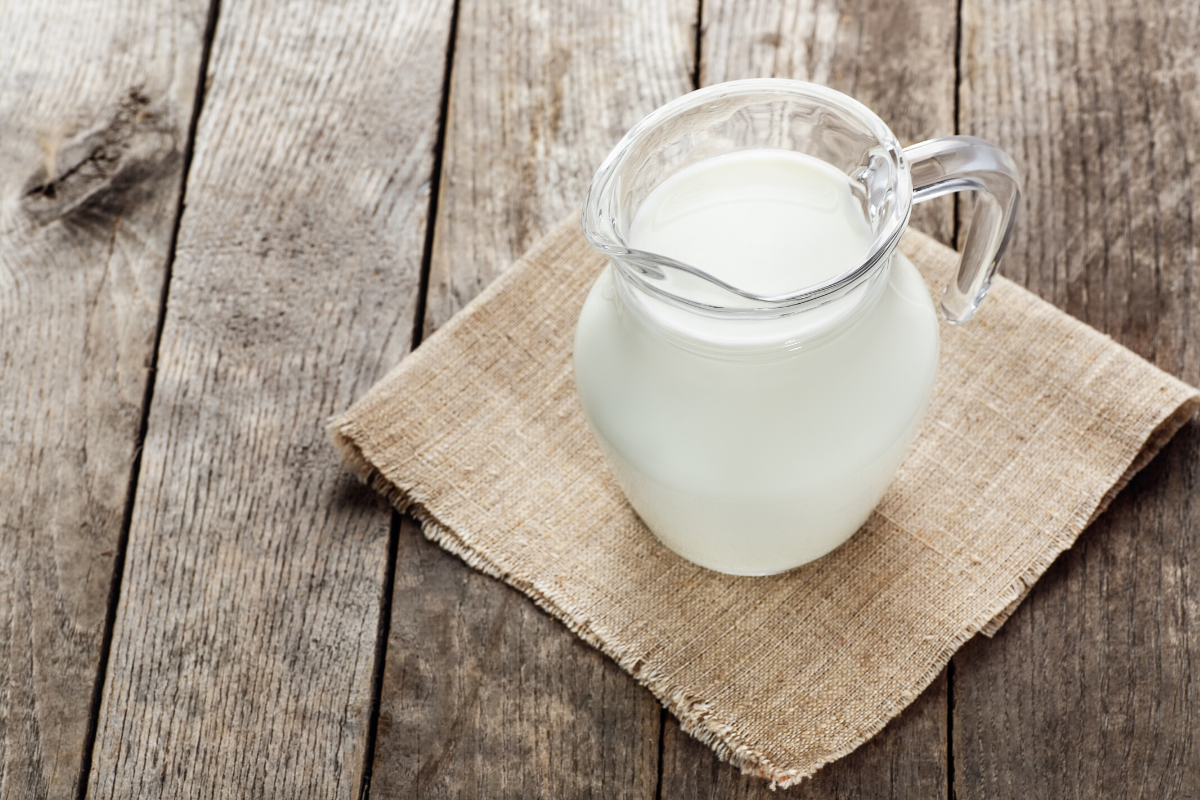 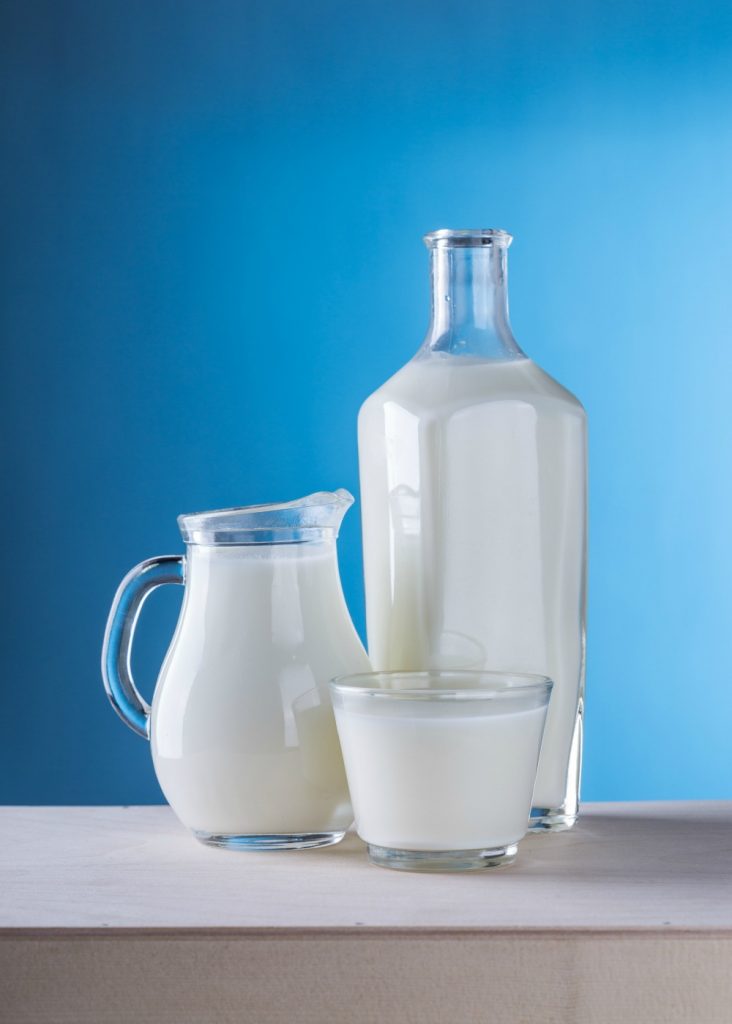 The Oxford dictionary describes milk as an opaque white fluid rich in fat and protein, secreted by female mammals for the nourishment of their young. It’s also described as the primary source of nutrition for infant mammals (including humans who are breastfed) before they are able to digest other types of food.

Did you know that some studies suggest that around 25% of people are sensitive to one of the proteins that are released upon digestion of milk?  Were you aware that approximately 65% of the human population has a reduced ability to digest lactose after infancy?  Considering that the majority of North Americans consume milk, I find the last two statistics to be alarming and upsetting. Alarming because I find the percentages high, upsetting because I feel I’ve been lied to by the milk industry.

Yes, “Milk Does the Body Good”, as advertisers have told us, but is it good for everyone?

Is Milk Good For Me? 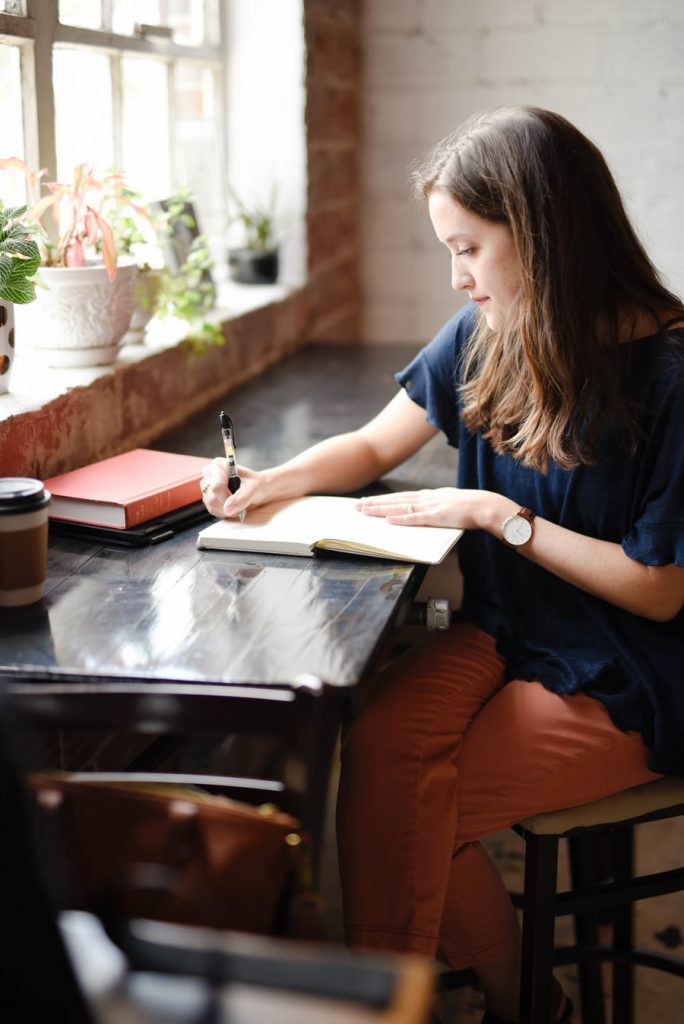 Ask yourself; is milk good for me specifically?  Is milk good for my specific body; for my health?  The answer comes back to how well you know your body. If you are not in optimal health, what are your symptoms?

Below were some of my health symptoms:

Because I have RA and other health challenges, I am constantly searching for pathways to better my health.  One of those pathways led me to a book called The Plant Paradox by Dr. Steven Gundry (see image below).  In this book, Dr. Gundry shares a health program that is based on eating lectin-free foods and on making some changes to how and what we eat. Dr. Gundry mentions that we should try to drink A2 milk instead of drinking conventional milk.  This is where I was first introduced to A2 milk. I was one of those Canadians who drank 1 glass of milk per day; mostly in my teas.  So, I researched A2 milk and decided to try it.  I have been drinking A2 milk ever since.  Why?  Because the above symptoms have been significantly alleviated, if not obliterated. 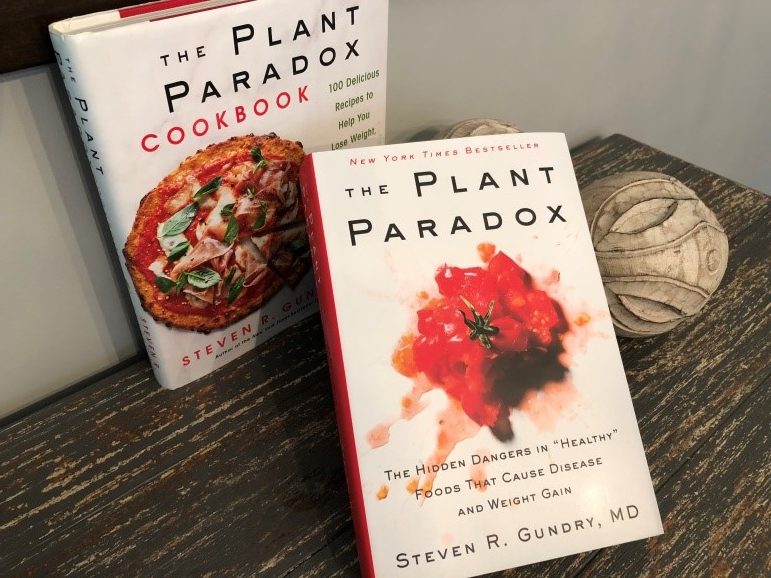 In this post, I am referring to the A2 variant of beta-casein protein milk, which I’ll refer to as “A2 milk” (uppercase “A”).  A2 milk can also refer to a brand of milk sold by The a2 Milk Company (lowercase “a”). In Canada, the dairy milk that we typically drink is a mixture of A1 and A2 beta-casein.  Once upon a time though, it used to be of the A2 beta-casein variety

“According to the literature, more than 10,000 years ago, and before they were domesticated, cows produced only the A2 beta-casein protein and not the A1 beta-casein protein. However, some 8,000 years ago a natural single-gene mutation occurred in Holsteins, resulting in the production of the A1 beta-casein protein in this breed. This mutation in the beta-casein gene led to 12 genetic variants, of which A1 and A2 are most common. The mutation was passed on to many other breeds, principally because Holsteins are used to genetically improve the production of other breeds. Slowly, the A1 beta-casein variant became dominant in milk. While dairy herds in much of Asia, Africa, and part of Southern Europe remain naturally high in cows producing A2 milk, the A1 version of the protein is common among cattle in the Western world.

A point of reference is that A2 milk products are made from dairy cows that produce only the A2 beta-casein protein, whereas today’s cow’s milk contains both A2 and A1 beta-casein proteins. The most common variants among Western cattle are A1, A2, and B.

In general, milk from Guernsey, Jersey, Asian herds, human milk, and others (sheep, goat, donkeys, yaks, camel, buffalo, sheep, etc.) contain mostly A2 beta-casein. Milks from Holstein Friesian contain mostly A1 beta-casein. The Holstein breed (the most common dairy cow breed in Australia, Northern Europe, [Canada] and the United States) carries A1 and A2 forms of beta caseins in approximately equal amounts. More than 50 percent of the Jersey breed carries the A2 beta-casein variant, but with considerable variation among the herd, and more than 90 percent of the Guernsey breed carries the A2 beta-casein variant.

a Canadian start-up involved in cutting-edge innovation in the dairy industry features this easy to understand graphic on their website. It compares A1 milk versus A2 milk. 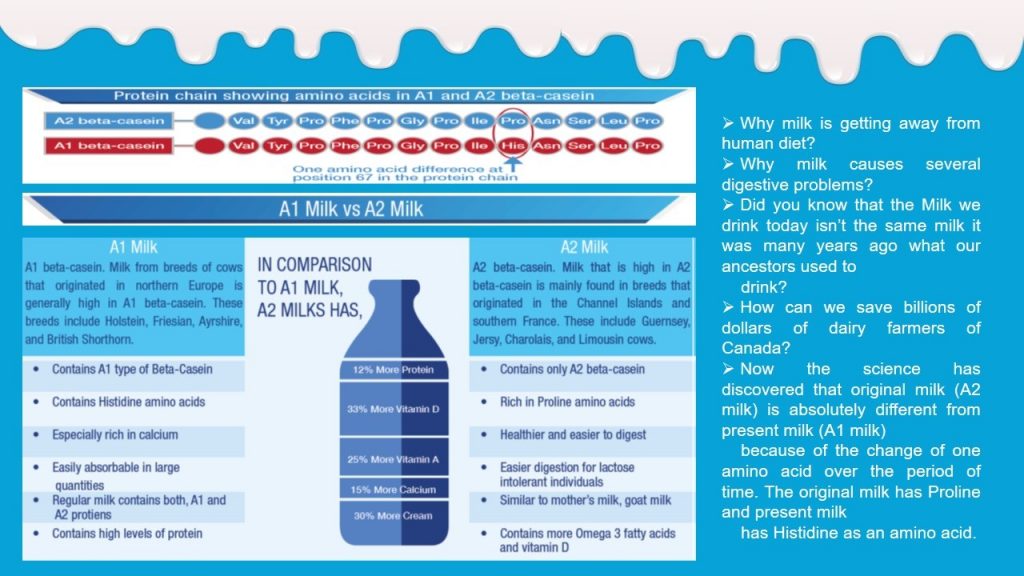 We are at a point in history where we don’t really take our food supply for granted anymore.  We want to know what we’re eating and where it came from.  We want to know what the benefits of eating certain foods are and what the harmful effects of eating other foods are.  We consume superfoods and get excited when we’re introduced to some new food touting some superpower.  We’re also less inclined to consume tons of junk food.  Some of us even receive daily emails from the Canadian Food Inspection Agency (CFIA) detailing all of the food recalls and potential food hazards related to ingesting certain food items. I want to be informed and from there I’ll decide what I consume. So, I do my best to inform myself.

I had never heard of A2 milk before reading the Plant Paradox.  When I saw the words “A2 milk”, it caught my attention.  I thought, “What is A2 milk and why is Dr. Gundry recommending it?”

Simply put, in some people drinking regular milk can cause abdominal pain and discomfort, bloating, diarrhea, gas, inflammation and congestion.  Some research suggests that the harm can be even greater, affecting brain function and increasing the risk of disease.  Research also suggests that drinking A2 milk can benefit people with Crohn’s, Colitis, Autism and Irritable Bowel Syndrome.

According to Dr. Gundry, the A1 beta-casein protein is lectin-like.  It converts to a protein called beta-casomorphin which can prompt an autoimmune attack when consumed.

My immune system was already being attacked by my autoimmune disease (RA), so I was under double attack because I was still consuming (conventional) milk, which I knew didn’t agree with me.  After researching A2 milk, I was very game to try it out. The a2 brand of milk was not available in Canada, so I tried to find another source.  My research led me to Eby Manor dairy farm, located here in Ontario.

Eby Manor produces milk from the Guernsey breed of cows. Their milk is called Golden Guernsey.  About 90% of their herd is 100% A2. They are in the process of breeding towards having their whole herd 100% A2. 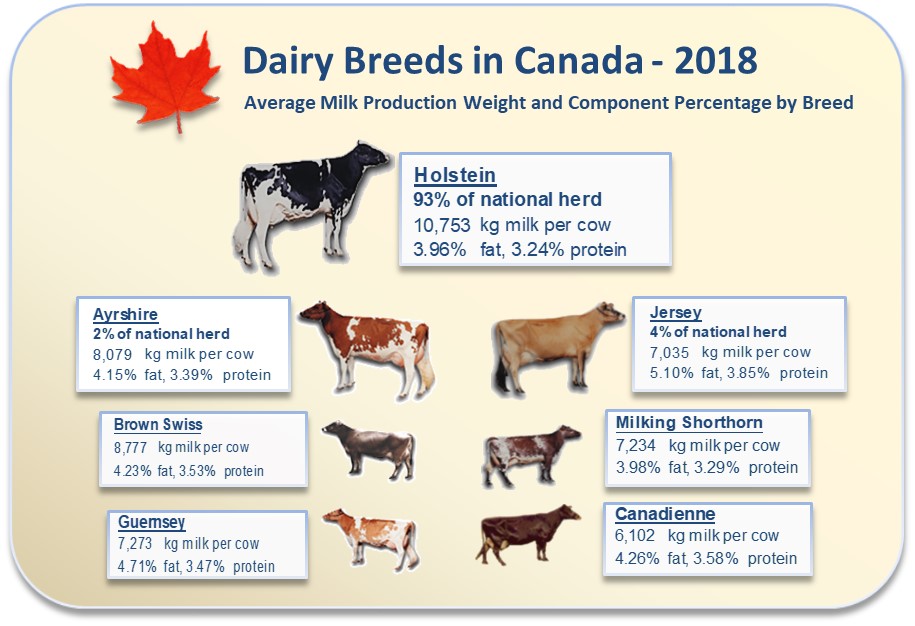 “All our animals receive individual care and are fed a balanced, non-GMO diet that promotes good health, longevity and nutritious premium milk.

-Guernsey milk is a premium milk; rich in beta-carotene, A2 protein, calcium and omega 3″ 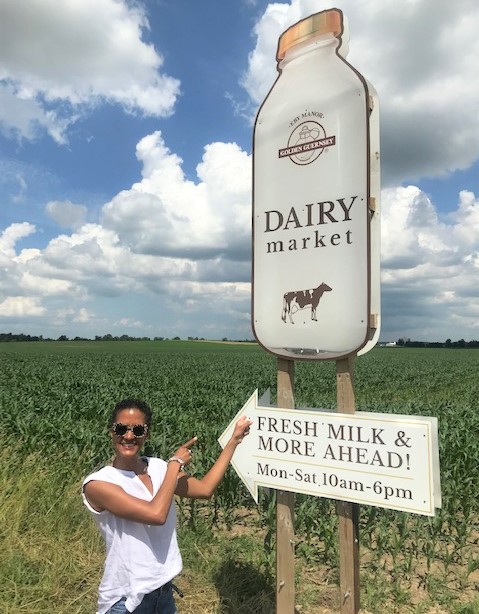 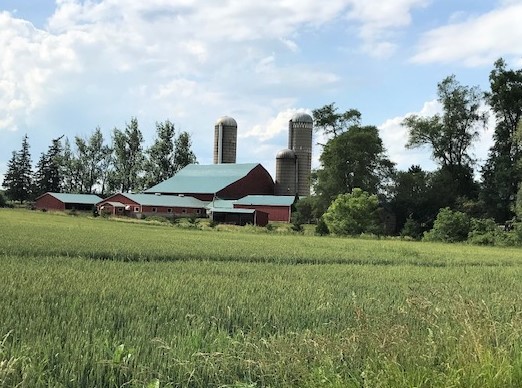 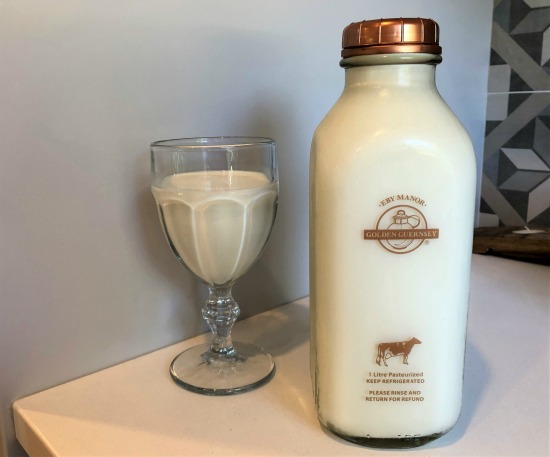 A b0ttle of the Golden Guernsey milk

See the highlights of my interview with Jim Eby from Eby Manor below:

Tidbit:  Did you know that human milk is like A2 milk in its composition? 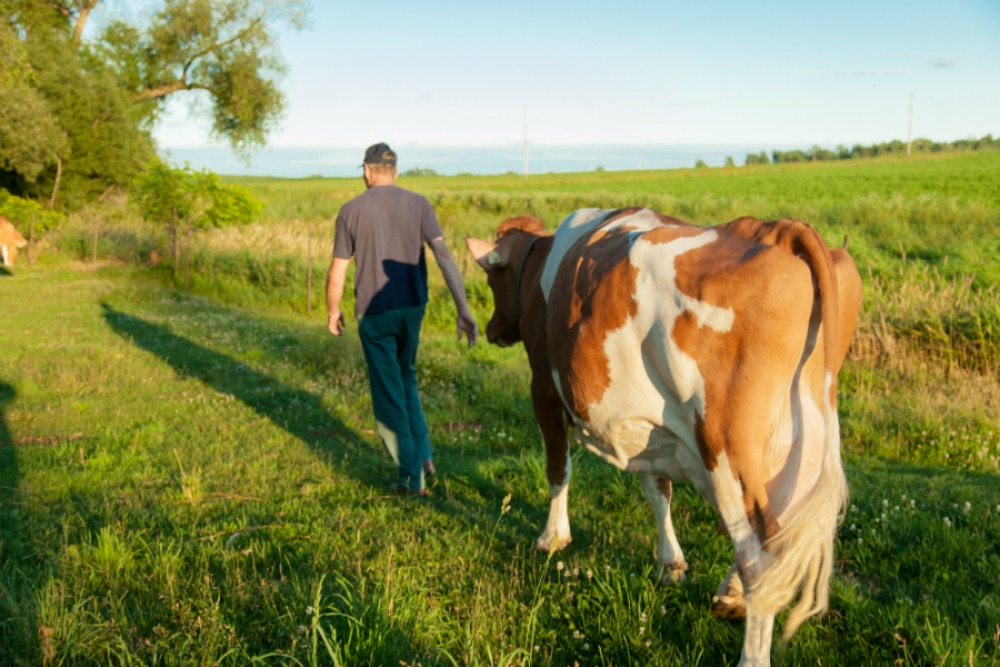 Mr. Eby and one of his beautiful cows taking a stroll

Is A2 Milk Right For Me?

The health benefits and health claims have been made.  You are your primary health advocate and the fact is that it is up to you to find out if A2 milk is right for you.  If you’ve been told that you’re “lactose intolerant”, could it be that you are sensitive to the A1 protein found in regular cow’s milk?  Are you on the Plant Paradox program, in which case which dairy you consume may matter greatly? Does drinking conventional milk affect you in any way?  Do you have trouble digesting milk?

You are the test subject here.  However you come to determine that regular cow’s milk might be a problem for you, consider trying A2 milk.

Your body will be the ultimate judge.

You need to know if it matters to you.

What are your symptoms?

You are the test subject here.

Test it for yourself.

Have you read The Guernsey Literary and Potato Peel Pie Society by Mary Ann Shaffer (see image below), or watched the movie of the same name?  The story takes place on the Isle of Guernsey, situated in the English Channel just off the coast of France.  Interesting tidbit, Guernsey Isle is where the Guernsey cow breed originated. 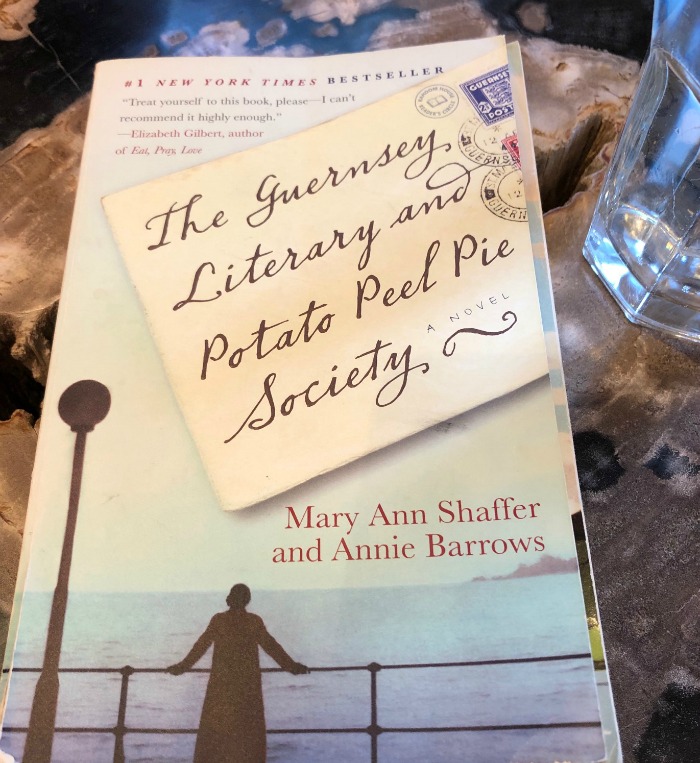 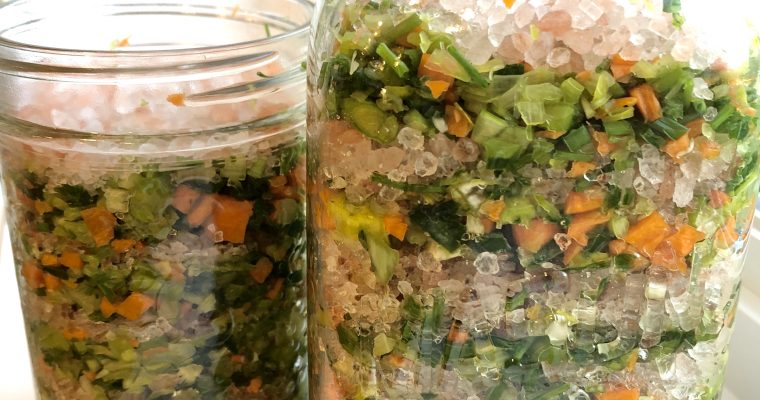 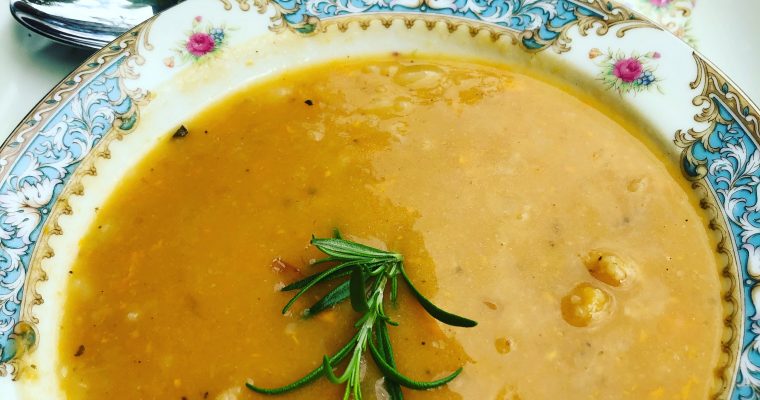 Cauliflower, the new rock star!  I cannot seem to get enough of cauliflower and that’s a good thing, because cauliflower rocks!  It’s one of the world’s healthiest foods.  It’s high in fibre and water. Both are important for preventing constipation, maintaining a healthy digestive tract, […]

Welcome to Hold the Lectin!

Hi, I’m Geneviève, an explorer of food and a personal growth enthusiast who has a passion for all things healthy, healthful and lectin-free! I created Hold the Lectin to share my inspiring story, in the hopes of helping you reach your best health potential the lectin-free way! Hold the Lectin is your road map to creating wellness and to making your lectin-free journey triumphant and empowering! Inspiration, hope, community, connection, resources and of course, delicious lectin-free recipes are a click away.

Make this year your healthiest year yet; Hold the Lectin!

HOLD THE LECTIN NEWSLETTER delivered to your inbox. Say YES to lectin-free success!